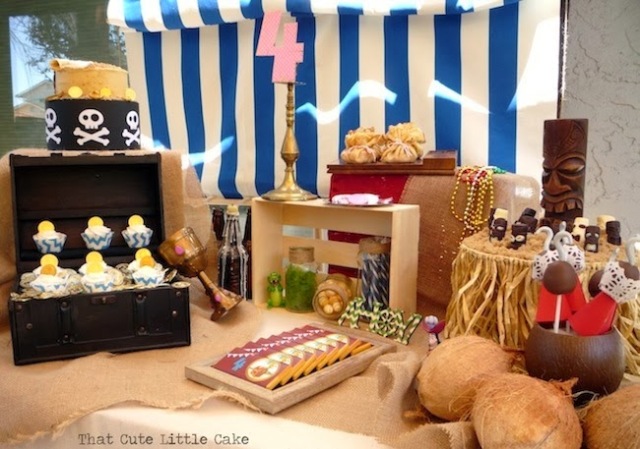 This Jake and The Neverland Party was styled by Virginie from  That Cute Little Cake for her daughter’s birthday. As told by Virginie by Cute Little Cake  “It was for Chloe’s 4th Birthday She discovered the show last winter and was “hooked” (!) straight away.  She requested that to be the theme of her Birthday Party and I gladly obliged! The show is fun and playful, full of colours, not so much dark and black as pirate movies usually are. I kept this in mind when designing the party and so I tried to create a dessert table that would be fun for the kids. The treats included chocolate tikis, Izzy’s pixie dust pouches (french >> crepes filled with strawberries), Golden Doublons cupcakes, Treasure chocolate bars, Hook’s hooks cake pops and a treasure map birthday cake.  The background for the table was a white and blue striped sail, like the ship Bucky in the cartoon I also made the cute little pirate banner spelling Chloe.The table on which the children had lunch was made to look like the pirates hideout, covered in treasures and under a ceiling of fishing nets full of jewels, treasures and buntings.  For games the children played at Knock the pirates over, Pin the pixie dust on Izzy and a treasure dig where they had to find hidden golden doubloons. They could then head to the shop to purchase pirate dress up items, sweets and treasure maps…. The shop was such a hit !!! They were counting their money to try and buy as much as they could, very sweet ! Then one of them realised they had bought a “real” treasure map and the treasure hunt began.
Styling, Baking, Photography: That Cute Little Cake http://www.thatcutelittlecake.com Party Supplies: party City http://www.partycity.com  Cake Pops: Goodness by Ansley https://www.facebook.com/pages/Goodness-by-Ansley/195017280537541?fref=ts  I created loads of printables for this party and offered them for free on the blog: http://www.thatcutelittlecake.com/search/label/FREE%20PRINTABLES 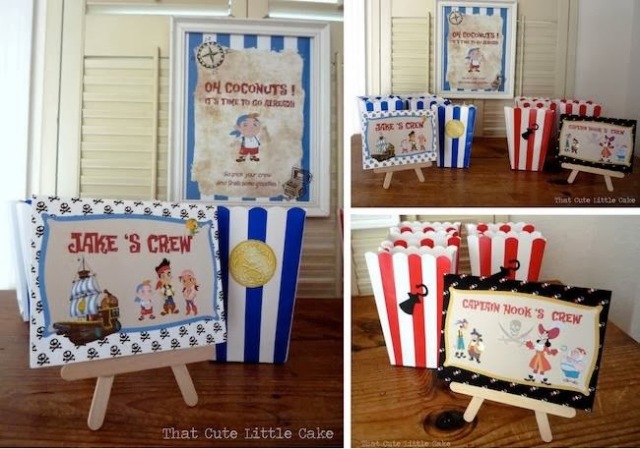 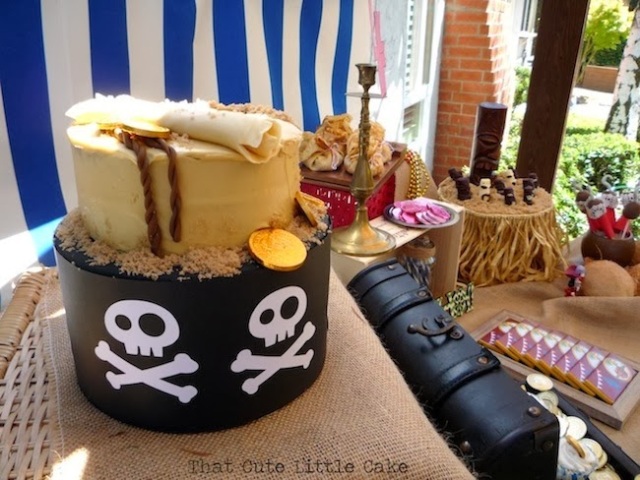